A race of aliens who want so passionately to end humanity that they are trying to destroy reality itself - and keep on trying, regardless of how many Lazarus Events the Ourobeans successfully trigger.

"The Apophis are nasty, mean, genocidal, vicious, unpredictable aliens, unwilling or unable to communicate with us. They are ugly too. Far more worryingly, they began winning every single fight. They started nearly all of them, but even the ones they didn’t, they invariably finished. It would have been impressive if it hadn’t threatened our very existence."

They have incredibly advanced tech based around crystalline energy sources that contain some... anomalous materials that human scientists have so far been unable to decipher. This is one of - but the only - way they differ to the Drones.

The Apophis are worryingly skilled at adapting existing tech/structures/forms and enhancing them with their own, almost like the way a parasite can change its host only the Apophis' talents don't seem to be limited to organic materials and structures.

Despite the recovery and documentation of a small number of Apophis Drones (see below), nobody knows what a 'pure' Apophis looks like. 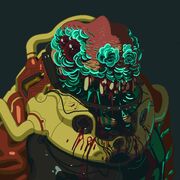 A headshot of an Apophis Drone - note the coral-like growths. According to our coroner, the cause of death was unrelated to the destruction of its breathing apparatus. A worrying sign.

IN THE GAME[edit | edit source]

They have still not been seen in the game as of yet, but are rumoured to be getting introduced in the near future.

For now, the few information given about the Apophis were given onto the game's discord :

"We want to keep the silhouettes of Apophis the same (or very similar) to the Drones so that the learned language of form and function that players have is not thrown away, but at the same time we want them to look cool, creepy and dangerous. Of course in the game's Lore, the Apophis somehow grow on (or perhaps mutate out of?) the Drones, but nobody's quite sure why or how. Hopefully we're close to nailing their look!"

The Prime Apophis. It was a force to be reckoned with. Deadly, driven and monstrously huge, it was finally brought low by the human pilot Ki just moments before the very first Lazarus Event.

The Apophis built a weapon - although technically more of an engine - that wrought the end of the universe. Deployed when they realised that humanity would bring them to a stalemate. Nobody knows how it works, only that the almighty, transdimensional Ourobeans fear it so much that they reset the entirety of reality every time it is fired.