Humans are the player race in Lazarus. The Ourobeans are using their martial prowess in the conflict against the Drones and ultimately to defeat the Apophis.

They're Humans, right? Humanity. Human beings. So basically us, but in the future. They've fixed some things and maybe broken others compared to the 21st century, but broadly speaking things get better.

Their main military forces comprise of small fighter craft supporting mid sized frigates, because since we stopped all the stupid infighting (a wonderful state of affairs that can be more or less directly raced back to the strength of the European Union in the early 21st Century) exploration and industry have been the biggest drivers for space-faring travel. The biggest ships in the human fleet are, to put it simply, delivery trucks. 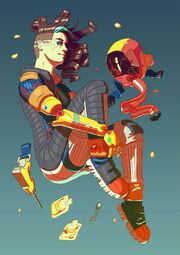 A picture of Ki, the first human pilot to strike a meaningful blow against the Apophis. Note the personalised marks on her prosthetic arm. Ki has been missing since the first recorded Lazarus Event.
Retrieved from "https://lazarus.gamepedia.com/Humans?oldid=474"
Categories: