Ki - perhaps known more widely known as the Lost Pilot - is the sole reason we have a chance to defeat the Apophis.

She was the first and best of the new generation pilot warriors, the ones trained from day one with their Golem partners. Hers was a legendary unit known as Robopug. It is unclear whether Ki herself named the Golem as such, or if it chose this rather blunt label itself.

A young woman of vicious temper and razor-sharp wit, she made no friends but rather won them as a result of her incredible deeds. She was the first person to be able to pilot the SH-15 (the first human fighter craft that fully incorporated Ourobean tech) and was there, right in the eye of the storm when the Apophis first triggered their universe-ending weapon. 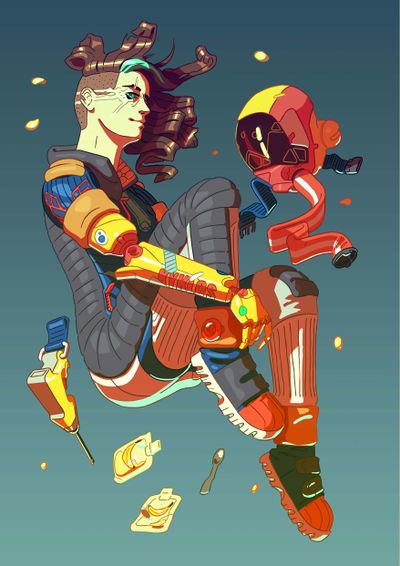 She’s the 3rd daughter of a 4th generation immigrant Korean family who live in London, UK.

As we now know, this is also the exact moment the Ourobeans reset the universe 7 days earlier... but she never came back. She's not the only thing to be lost to us since the Lazarus Event became a part of our lives, but certainly she was the most valuable. Some people hold out hope that she survived and will return to us. Others are adamant that she died making the ultimate sacrifice taking down Ammut, the Prime Apophis, but in a cruel twist of fate the energy unleashed on its death wiped the two of them from reality just a heartbeat before the Ourobeans reset everything.

It is likely we will never know the truth.